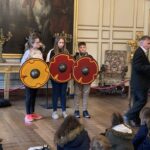 Students from Harrow Way bought recent history lessons to life with a trip to Warwick Castle, famous for being one of the top ten most visited attractions in the UK. Originally built over 1100 years ago by William the Conqueror, the Castle, with its original motte, portcullis, murder holes and battlements, provided the perfect backdrop for the Year 7 students studying medieval times.

Commenting on the value of the offsite History lesson, teacher Christina Brown said: “Although students can access lots of great learning resources at Harrow Way, sometimes nothing beats seeing and experiencing a subject in a real life context. Warwick Castle is very impressive in reality and it was great for students to see elements of a medieval castle which we have discussed in the classroom. Naturally its structure has changed and adapted over time which students could relate back to having been taught this in the classroom. What was particularly interesting was the opportunity to identify key historical figures who visited the castle over time, such as Henry VIII and Winston Churchill.”

Part of their exploration included visiting the caste dungeons where students saw first-hand the implements of torture used in medieval England and the impact of the Black Death on the people of Europe. Some students also took part in a mini weapons workshop finding out how they were used on the battlefield.

Ms Brown concludes: “It was a fantastic day and I was proud that even at a young age the students could appreciate the splendour of the castle. Not sure though that they enjoyed the 500+ step climb up and over the castle ramparts!”