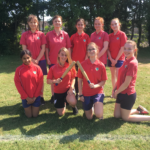 The Year 10 team played two games this week and very victorious in both. On Tuesday the girls beat Rookwood in a closely fought game, 12 1/2 rounders to 11. Batter of the game went to India Jones, Fielder of the game was bowler Grace Farrelly.

On Wednesday they played Winton, winning 25 1/2 rounders to 13 1/2. Players of the match were Amelia Kalwajtys and India Jones. 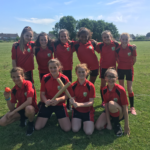