As you will be aware this year marks the 50th Year Anniversary, when Harrow Way opened its doors in September 1967. I mentioned this in assembly to the students this week and we had some time reflecting on the decade it all started in 1960!

When looking at this amazing decade, I could have chosen from such a wide range of events, movements, and people â€“ I was spoilt for choice! But for me, the iconic image of the 1960s comes from the end of the decade. 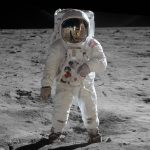 The moon landings still represent the zenith of human scientific achievement. I have written before about the so-called â€œmoonshot thinkingâ€ of President Kennedy who, in September 1962, gave a speech at Rice Stadium where he said that America would put a man on the moon before the end of the decade.

However, my assembly did not focus on John F. Kennedy, Neil Armstrong, or Buzz Aldrin, but another hero of the space programme â€“ and one you may not have heard as much about. That hero is Katherine Johnson.

However, Greenbrier County did not offer schooling for black students past the eighth grade, the equivalent of our Year 9. Johnson, however, knew that she was going to be a mathematician, so her family split their time between Greenbrier County and Kanawha County, where Katherine could attend High School. In 1938, Johnson became the first African American woman to attend the graduate school at West Virginia University, following the United States Supreme Court ruling which allowed for the integration of different races in American education.

Joined NASA in 1953 when it was still called NACA, the National Advisory Committee for Aeronautics. At first she worked in a pool of technical women performing math calculations, known as â€œcomputorsâ€. Katherine has referred to the women in the pool as virtual â€œcomputers who wore skirts.â€ But her skill with analytic geometry meant that she was soon working on the all-male flight team. While the racial and gender barriers were always there, Katherine says she ignored them.

What was it that made her so successful? She remembers quite clearly her experience at the time. â€œThe women did what they were told to do,â€ she explained. â€œThey didnâ€™t ask questions or take the task any further. I asked questions; I wanted to know why. They got used to me asking questions and being the only woman there.â€

She calculated the trajectory for the space flight of Alan Shepard, the first American in space, in 1959. She also calculated the launch window for his 1961 Mercury mission. In 1962, when NASA used electronic computers for the first time to calculate John Glennâ€™s orbit around Earth, officials called on her to verify the computerâ€™s numbers because Glenn asked for her personally and refused to fly unless Katherine verified the calculations. She calculated the trajectory for the 1969 Apollo 11 flight to the Moon, and worked out how to get the astronauts on Apollo 13 safely back to Earth when they called back to say â€œHouston, we have a problem.â€ She went on to work on the space shuttle programme, and she did preliminary work on the trajectory for a manned mission to Mars before her retirement in 1986. Last November, at the age of 98, she was awarded the Presidential Medal of Freedom by Barack Obama for her contribution to space flight, civil rights and gender equality.

Katherine Johnson is a truly inspirational figure, undaunted by the fact that she was born into a world which was prejudiced against both her gender and her skin colour. She new that she had something to offer, and she was assertive enough to make sure she was heard. We can all benefit from her advice: â€œI was always around people who were learning something. I liked to learn. You learn if you want to. So youâ€™ve got to want to learn.â€

Finally, now, theyâ€™re making a film about her: