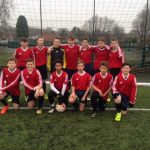 The Year 8 Football team played beautifully to win 3-1 against a talented Wellington Academy team in the Andover District league. The team showed their class playing in a structured dominating manner. Aston Mussells opening goal was the highlight of the three goals rocketing into the top corner from 25 yards. Dylan Willard made it comfortable with the second goal and gained Man of the Match for his display initially on the right wing then in centre midfield.