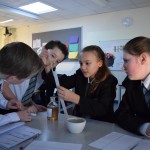 As far as the ‘first years’ were concerned, Harrow Way was renamed Harrowarts School of Wizardry on Friday for a day of literacy magic. Year 7 students went on a Harry Potter cross-curricular adventure exploring wizardry, witchcraft and magic.

After a special assembly to introduce the day, the trainee wizards and witches tried their hand at various lessons that explored familiar subjects but with a magical twist. Science gave the students the ability to write with fire and among the literary haven that is the school library they duelled with wands using Latin vocabulary. In English they wrote reports on how to defend against the dark arts for the wizard world newspaper â€˜The Daily Prophetâ€™. Witchcraft dates back centuries and in History students explored historical events linked to witchcraft from the â€˜real worldâ€™. This history of Harry Potter himself was explored in media by looking at the films dedicated to the famous wizard while, in Art, the students created potions to explore colour theory, alliteration and rhyme.

In the film Harry Potter and the Philosopherâ€™s Stone Harry is given an owl, Hedwig, by Hagrid. Owls have long been associated with wizardry and the students got to learn a little more about these special birds as Katie Barnes, a volunteer from The Hawk Conservancy Trust introduced them to Bumble the Boobook or Morepork owl.

After a day or magic and mayhem students were left in little doubt that literacy is at the core of most things. As Assistant Headteacher Graeme Fluellen concludes: â€œHaving a Harry Potter themed day is the perfect way to engage students in the subject of literacy. Everyone knows the story of the young wizard, Harry Potter and we wanted to demonstrate to students that literacy is the golden thread which runs through every subject. Literacy skills are so important and for some they can lead to hugely successfully careers such as J K Rowling who sold 450 million Harry Potter books making her the first person to become a billionaire from writing novels. Letâ€™s hope the next JK Rowling is at Harrow Way.â€