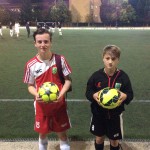 Another great day was had in Barcelona on Wednesday, training in the morning followed by a swim in the pool. After lunch they all went to the beach and played some games before a bit of shopping in the local area.

In the evening they headed out to the stadium which our matches were going to be played in. They got to see some tiny tots training and they were incredible!

In the evening both teams played against CE Farners. The white team played 2 separate teams for each half. The first team the result was 6-0 to them but for the second tea, we drew 2-2 with 2 superb goals from Cameron Walker. Man of the match was Rhys Evans for fantastic commitment.

The red team drew 3 all with goals from Nathan Hartfield, Tommy Willard and Conor Cousins. Matt Cooper was man of the match for his excellent defending.