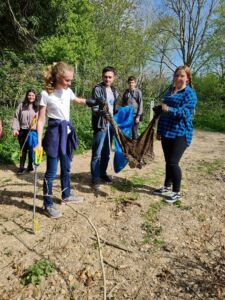 Harrow Way is one of only 16 schools in the country taking part in an environmental pilot programme, ‘Bring about Change’, which will be rolled out nationally next year. Environmental Senior Prefects have relaunched the school’s Eco Club to enter the pilot which is being run as a competition by Young Citizens, which will see them revamp and improve an area in the local community.

For their first eco initiative Harrow Way’s Eco Club descended on Swatton’s Field, the area behind the BMX track at Charlton Lakes. Giving up their own time over the weekend the  students litter picked the area.

Commenting on Harrow Way’s young eco warriors Tori Blair, Curriculum Lead, Citizenship and Character Education, said: “Our Environmental Senior Prefects were keen to resurrect the Eco Club in order to take part in Bring about Change pilot programme. As part of this they will be putting together a short film which will tell their own eco story. It’s great to see students drawing on a number of cross-curricular skills in order to enter, from Environmental Science to IT and Media. The deadline for their submission is early July and they are keen to win as the prize is £150 which they hope will fund a number of school based environmental initiatives.”

Following the success of the Swatton’s Field litter pick the Eco Club are now in discussions with Test Valley Borough Council to see what else they can do to revamp and improve areas of the local community. Their ideas so far include benches, bins, bird boxes and beebombs which are handmade wildflower seedballs.

The Eco Club is now also working hard towards Harrow Way becoming an Eco School in 2023.