U15 Cricket – Third in County Competition 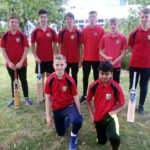 On a lovely Summer’s day at St Cross Cricket Club the best under 15 cricket teams met for a days competition. All teams showed some great cricket skills and it was played in a competitive but sporting manner.

Harrow Way played four 8 over games and won against Perrins and Applemore College. All Harrow Way players performed very well but special mention has to be made to Oliver Banks Williams for playing for an age group up and opening the batting all day, James Pay for a great bowling spell where he was on a hat-trick, and Neo ‘Boycott’ Black for hitting his first ever six for the school.