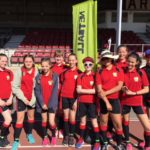 On Friday 22nd June 2018, the Year 7 netball team: Megan Richmond, Emily Strudwick, Daisy Fletcher, Faith Holman, Kaitlyn Pedder, Danni Gooden-Husbands, Grace Homer, Keira Inman, Izzy Phillips and Lara Dale, went to a Netball Tournament at the Hampshire Youth Games. On a very warm sunny day in Aldershot, the team were just pipped to the post by one point and came 4th place out of eight schools. After qualifying to play in the games earlier in the year, this is a huge achievement for the team, finishing in fourth place out of all the teams in Hampshire.

The Hampshire Youth Games had an opening ceremony which was formally opened by Steph Twell, an Olympic Athlete. The ceremony included dance, drumming and a parade around the athletics track. Each team also had to take a fair play oath, which was spoken out loud together.

Firstly, the Harrow Way team played against Oaklands and won 7 – 2, the team played well and had a strong defence. The next game was a very equal game, unfortunately St Anne’s were victorious winning 6-5. The next two matches were up against very good teams but Harrow Way managed to hold out for a draw in both.

The last match of the tournament was against Kings School, who were one of the best teams in the tournament and came 2nd place overall, we lost 11 – 3 against them.

Overall, the students had a fun day out and really enjoyed themselves. They would like to thank Miss Escritt for coaching the team and getting them to good enough to play in the tournament. At the end of the day Miss Escritt treated all the girls to an ice-cream to cool off after a hot day.