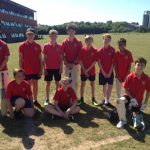 On a lovely Summers evening the under 13’s cricket team played their semi-final of the District Cup. Harrow Way scored 118 from 14 overs with Josh Banks Williams and Will McDermott both scoring well and eventually hitting the enforced retirement score of 30. Wellington Academy made a brave effort in their innings but 3 wickets from James McDermott and 2 from Alex Pardy (in two balls) won us the game. Well done to the whole team for solid fielding and batting displays. We are due to play John Hanson in the final next week.