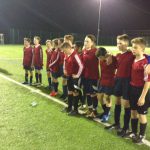 Harrow Way Year 8 football team played Salesian School in the Quarter Final of the Hampshire Cup. It was a game played in tremendous sporting spirit with both teams playing with a passion which was a joy to watch. The score was 0-0 at the end of full time with Man of the Match, Macca Crook, keeping Harrow Way in the game with a series of outstanding saves. Harrow Way scored first with a free flowing one touch goal in the first period of extra time but Salesian scored in the second half to equal the score. Unfortunately Harrow lost 5-4 on penalties.