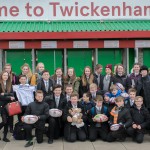 Mr Reed and Mrs Cook took 35 pupils from years 7, 8 ,9 and 10 to Twickenham rugby stadium to watch the new England rugby team in an open training session. The students got to watch some rugby legends, as well as future stars, honing their skills as well as listen to some interviews with head coach Eddie Jones and new captain Dylan Hartley amongst others. Some pupils were even lucky enough to get their tickets, rugby tops and rugby balls signed by the players. The school would like to thank our guest coaches Charles Grey and Dave Gregory who came along as volunteers in order for the trip to run. They also freely give up their time every Thursday to help coach the boys rugby. Mr Gregory took some photos of the day which can be seen here.