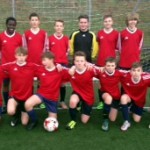 The year 9 football team won convincingly against Test Valley in the Quarter Final of the Winchester and District Cup. They initially conceded a goal within 5 minutes due a defensive mix up but responded with a great display of direct attacking football to win 10-1. Man of the match was Callum Dewhurst with a dominating performance in midfield.